An Entry to Anglia

Traveling west from The Dark Country to Wessex, your caravan boss this time is an enigmatic man with long black hair and long black mustachios. He claims to be Italian, and goes only by the name Migellito. You believe you are somewhere in the Black Forest when you notice it has become much darker. The vaporous air hangs in an aphotic curtain. Passing through this preternatural twilight, you journey through trees grown rugose and monstrous, glowering down over your caravan. Lurid hints of golden light creep and lurk behind the wood’s black boles. The gloom-heavy forest splits, and you look out onto grey undulant hills hunched beneath a leaden sky. A damp and forbidding chill crawls along the turf and embraces you.

Migellito speaks, telling you “this has happened before.” He points to the smoke. “There lies Bridgewater. It holds a smithy and an inn. What else, I do not know, nor do I wish to.” He points to the ruins. “There lies Nicodemus Castle. Some who chance there don’t return. Those who do bear heavier pockets, on the balance of it. We make camp here, and with the dawn we turn back into the forest and on to the lands we know. Do as you wish, but the caravan leaves at dawn.”

Black Goat of The Woods

You have trouble defining the feeling of these woods. They are not necessarily evil. They are.. Wrong. 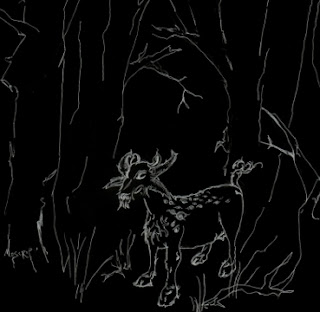 When seen from a distance this goat looks unusual, but not impossible. It is dark. Black, in fact. It has 4 horns, which normal goats sometimes have. There is something disturbing about its back.

When you can see it properly, you see the dozens and dozens of moving eyes on its back and shoulders. The eyes are of many sizes. They gaze in many different directions. You dare not look closely enough to see if they are of many colours. Then you see the many mouths opening and closing.


Then you see the intermittent dripping. The dripping of eyes. The eyes slide down its sable hide to the ground and grow. They grow and transform.

1d6 eyes and mouths slide from the goat's back and shoulders each round, each growing to a full Spawn of Shub-Niggurath in one round. The goat itself is an avatar of Shub-Niggurath, and as such is virtually indestructible. As an instantiation of the Old Ones, it is also all but oblivious to mundane creatures, such as adventurers. Due to its constant propagation, it is horribly easy to follow its trail, though perhaps unwise to do so.

Posted by migellito at 5:44 AM 4 comments

I’ve gone over this ground before, but today I’m riding it on a different horse. In getting ready to run a hangout game on G+, I needed to make a decision about two main things. Magic and hobbits.


It isn’t that I don’t like hobbits. I think hobbits are great. I love their anachronistic lifestyle, with waistcoats and sideboards and grandfather clocks plopped in the middle of a medieval milieu. However, I also think hobbits only really belong in Tolkien’s Middle Earth. Sure, there are little tiny people in lots of legends and myths and tales, but they’re not really hobbits. Leprechauns and brownies and hobgoblins are not hobbits. Hobbits are setting-specific.


Now back when I ran my old old game, I said it took place on Middle Earth.. just not a part of Middle Earth anywhere remotely near the events of the books. This let me put in hobbits and other things with a clear conscience. I think I’d like to distance myself from that idea though, and have events take place in their own world. Thus, for now at least, no hobbits. Instead, folk-myth gnomes. Smaller than hobbits, remotely similar anachronistic lifestyle, living in and under trees instead of in and under hills. A big difference is that these little gnomes aren’t skittish about adventures or magic.

The problem with magic is the same. The system used by DnD throughout most of the game’s history, and used also by the overwhelming majority of similar games, is setting-specific. The idea of only being able to hold, like bees in a jar, a certain number of spells within one’s mind, and then having them disappear to blankness upon casting, is very interesting. It makes spellcasters engage in some strategic decisions, which is a good and interesting thing. However, I also think it only really belongs in Vance’s Dying Earth. The majority of magic in old legends and tales just isn’t done that way.

The problem with all the ideas I was having about how to deal with magic boil down to pretty much one issue. How do I keep magic from being overused without adding more mechanics to the game? Spellcasters in stories clearly have something against blasting a zillion spells around all the time. Something to do with the balance of nature and not wanting to incur the wrath of chaos or dark outer gods or something, I’m sure. Spell points are too fiddly, I’ve decided. Besides, what are those points measuring? Fatigue of some kind? Fabled spellcasters only seem fatigued after certain specific things, not just everything. On the other hand, I hate it when perfectly interesting spells go unused for ages and ages because the likelihood of needing them is so low.

Here’s what I came up with!

Casters use the memorisation tables in the rules they’re currently using. For an OD&D magic-user, for example, this means 1 first level spell at 1st level, 2 first level spells at 2nd level, etc. They also say which specific spells they have prepared, just like usual.
But!
Their prepared spells are just the ones they have at the front of their mind, ready at a moment. They can, instead, cast any other spell they know of the same level, but at twice the casting time. Have Sleep prepared and want to cast Charm Person instead? No problem, but it will take you 2 rounds to cast that Charm Person instead of just 1. A big difference when death is on the line!

What if your 2nd level magic-user has already cast two 1st level spells and needs to cast another? Same thing - it will take double the casting time to get it off. That’s not all though. For exceeding that spells-per-level number on the memorisation chart, you need to roll a good old fashioned save vs. spells when you cast it. If you make the save, no worries. Fail the save, and you have to roll on a spell failure table. Instead of creating extra work, rolling on a table if you fail should just create some anxiety and suspense, which are great things for a game.

Ooh, a table!
No, I didn’t make one of my own yet. I’ve seen several out there that looked pretty neat. If you’ve made a spell failure table for some reason, stick a link to it in the comments down there. :)

This also works if you want to let spellcasters attempt spells which are beyond their current ability, something which happens in the stories now and then. Apply penalties to the save vs. spells depending on how far beyond their abilities they’re trying go. I wouldn’t allow a 20 to always succeed in this case, either.

One more thing I’ve decided. A character can only benefit from one casting of any specific healing spell once per day. Once Dilbod has been healed by a Cure Light Wounds, the magic needs some time to sink in before another Cure Light Wounds will have any effect on him, regardless of who casts it. A different spell, like Cure Serious, could help him some more before tomorrow though. This may be fairly harsh, but I think it’s necessary if I’m giving casters a way to exceed their limits. I’ll allow people to bind open (only) wounds to stop bleeding and get back 1hp, once for each combat in which they get themselves hurt.

Posted by migellito at 1:39 PM 8 comments