This is a total rework of the Caves of Chaos from B1 - Keep on the Borderlands. I drew this sometime around 1993 to better fit the style of my current group. They were extremely clever, very cautious, mostly around 4th to 6th level at the time, and really enjoyed a challenge. The different colours are to help differentiate overlapping areas, and there are several places where you can see little bridges spanning a tunnel below to connect two sides of a tunnel above. You can also see elevation marks and occasional elevation numbers. I can't remember right now where my zero was for elevation. I thought it was the floor of the box canyon, but looking at some of the numbers I don't get that impression now.
It was stocked in the same spirit as the original EGG module, but with increased numbers. There were also many residents of the Caves who had class and level rather than standard stats for their species. This was present in the original module, as far as I can remember (can't be arsed to look it up now) and I expanded on the idea for my version. 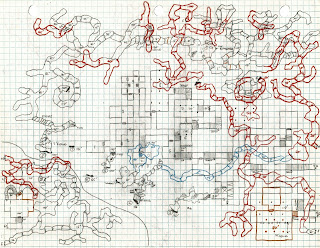 Posted by migellito at 2:25 PM 2 comments 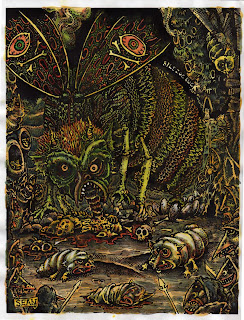 Travel across the face of Grot is an inherently hazardous and chaotic affair. As a group of adventurers progress, the inimical terrain around them is randomly generated. This is true even when traversing areas they have been through before. The perilous mountain ranges, caustic seas and the six great citadels stand as the only static landmarks of this percolating milieu of corruption. Below are two examples of the tables useful for inflicting this environment.