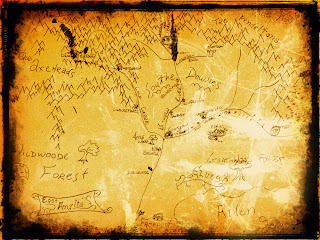 This map wasn't actually found last night, during my regular Monday night game. It was found in last week's game, by Dodekatheon, Priest of The Spider God. He discovered it on the marble desk where Darf the Dwarf cut off his own hand to save his life from poison; poison injected by a needle hidden in the top drawer handle of a marble desk; a marble desk with accompanying ancient, worn down marble chair, so old that the centre of the desk is worn a full half inch low by the passage of hand, pen and paper.

Those present were quite sure the map had not been there when Darf's extremity was removed. Neither does it have any blood on it, as do the other parchments on the desk. Furthermore, it bears words in what can best be interpreted by the discoverers as some obscure variation of Anglo-Norman. All the other papers are written with Devolved Morvalian.

Therefore, how did this map come to be present on this desk, in this room? What does it indeed map? What connexion might it have with the elusive spearman? When pursued, the spearman fled down a long, waterlogged, subterranean passage. The passage forked. Where did the spearman go? Who is he?

In last night's game, none of these questions were answered. However, another question, one which our harried vagabonds had not even asked, was answered in full. A matter of weeks in The Lands We Know amounts only to a matter of days in this extrinsic realm of Anglia, wherein Nicodemus lies.

The protagonists had more earthly concerns, of course. The Southern Gatehouse remains cleared of all but the rats. The goblin Ug, beetling away in the subterranean foundry, had not the time to yet complete the mechanism which will hopefully replace Darf's hand. Fap, the she-goblin, had no skill in smithing. Ug was amenable to the impending passage of his loyalty from Darf to Philip the Bloody; after all, Philip is an obvious wizard, and one of clear and decisive mien.

Posted by migellito at 5:24 PM 1 comments 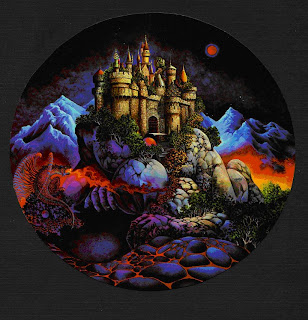 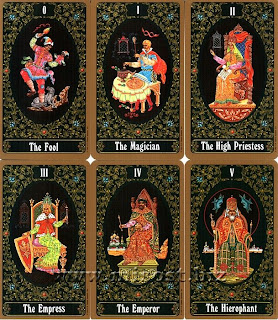 Posted by migellito at 6:02 PM 3 comments

My Take on Sigil

Planescape continues to interest me, and if you look far enough you can get there from Castle Nicodemus. 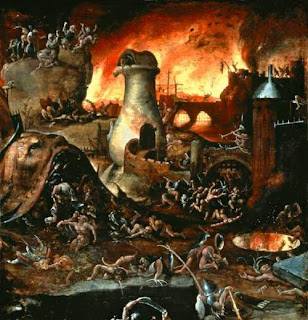 My Sigil is a place of wonder and amazement. My Sigil is a place of disillusionment and horror. You will not find priests and priestesses there energised and fresh from afternoon tea with their deity. You may, however, find clerics who seem to stare blankly through you, and who never say a word.

There is no vast wilderness where a hexcrawl will eventually take you from Asgard to Olympus to Gahenna. There is no miles-high spire of rock with a spinning cheerio at the top. There is, though, a great and ancient archway which holds a door of iron 101 cubits high, and which bears the words "Lasciate ogne speranza, voi ch'intrate."

In fact, you will never see the 'outside' of Sigil's massive toroid. Assuming an outside even exists, in it you would find yourself outside reality, and it would shred your mind. 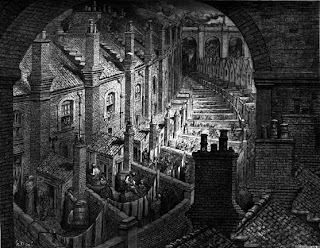 Sigil is not the true name of the city. This moniker refers to the symbol which stands for, or perhaps spells its true name. Only one individual in all the multiverse knows the word for which this glyph stands, and to speak it is to grasp the fate of the City of Doors. This is The Lady of Pain.

Posted by migellito at 1:39 AM 2 comments

It's been over a week since megasuperGMSunday, and I still haven't gotten up the promised and requested TPS Report. I will. Really.


Not right now though. Right now, it's another list of stuff about the Grot setting I'm working on. There's a label thing you can click on over there to see all of them so far.

Posted by migellito at 2:58 PM 2 comments 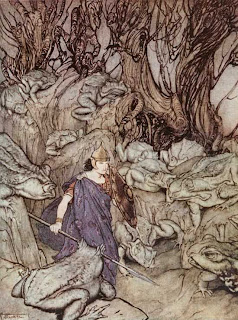 More stuff about Anglia, the part of the world where Nicodemus Castle sits. Lurking. Like a toad in a hole.

Posted by migellito at 4:36 PM 3 comments

I originally posted this a while ago on the Castle Nicodemus devoted blog. I've since decided not to bother with keeping a separate blog for it - kinda dumb. Thus, I'm re-posting it here.


Thanks to Brendan at Untimately! Here are 20 rule questions that are bound to come up at some point, and the way I will answer them for Nicodemus games.

Posted by migellito at 1:49 PM 0 comments

SUNDAY, SUNDAY, SUNDAY!! It’s the first annual GMs Day Games! March 4th at the Nicodemus Coliseum and Arena. MONSTERS!! NITRO-BURNIN’ WIZARDS!! It starts at 10 AM Eastern, but it goes TIL ALL THE PLAYERS ARE DEAD! No reserve seating, tickets are free! You can have the whole seat, BUT YOU’LL ONLY NEED THE EDGE!!!

Running all day Sunday on G+ Hangout, for as long as I have players, with a break in the middle while I go play Barry Blatt’s Tekumel. Bring your flailsnails characters and come and go as you please. Join anytime and stay as long as you like.

Posted by migellito at 3:04 AM 0 comments