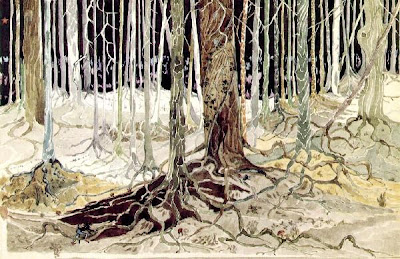 Now, I love both The Hobbit and The Lord of The Rings. The Hobbit, as is popularly stated, makes for a great DnD setting. However, Rings doesn't. The reasons are many, but mostly it's because you either need to pick some point far back in history, or some point after the whole thing. If you pick a point in time during the book, you end up as some minor player on the edge of Important but Precarious Events. If the DM doesn't railroad you, you really end up railroading yourself, one way or another. It's all good for an MMO (I enjoy that game) but sucks for DnD. Oh, and picking a point after the book? There's not much excitement there, since the overarching ultimate pervasive goal of the entire trilogy is to remove the violent dramatic excitement. See, that's a bad setup goal for DnD. You don't want your goal to be Make Things Boring.


So now what? Time to fiddle about. For my purposes, the trilogy is related by Samwise. He is a well-meaning, sentimental, unreliable narrator. He is pretty upset that his best friend died in what turned out to be a boondoggle. Instead of being bitter, he writes a view of what he wishes happened.

The Changes So Far:
Gandalf was a mid-level magic-user, not a divine being. When he bit it in Moria, that was it for him.
Aragorn wasn't really a prince.
Boromir didn't have a noble change of heart at the last second. The Ring was too strong for that.
Throwing the ring into the lava didn't do shit.
Faramir fried in a fire.