My long-awaited adventure for old-school D&D and NGR is available now at DriveThru RPG. Here is the link! Oakfell Vale is a secluded, heavily forested little valley watched over by a temple of druids. Except they don't really watch over it anymore. They have become complacent over the years, and loathe to interfere in the natural life of the vale. Unfortunately, there has been something growing in the vale, a terrible corruption, which is anything but natural. It is up to the players, if they choose to do so, to fire up the druids and do something to stem the tide of corruption before it's too late.
Many thanks to Zzarchov Kowalski for publishing this, and to Chris Huth and Kelvin Green for the art. Also, a big thank you to Dyson Logos for the great work he did with my maps!

Posted by migellito at 3:02 PM 4 comments

I am currently putting the finishing touches on a cyberpunk novella. The protagonist was inspired by the painting to the right. In discussing the character in the story, my wife suggested I think about why it was important for her to be a black Hispanic woman. There is nothing in the plot of the novella which absolutely requires her to be black, or Hispanic, or even a woman, but I think it is this very fact that makes it important that she is.

A few years ago, on Martin Luther King Day, I wrote a short piece about an episode of the original series of Star Trek, The Ultimate Computer, episode 24 of season 2, from 1968. I think it goes a little way toward explaining what I mean by that, and I've reprinted it below. 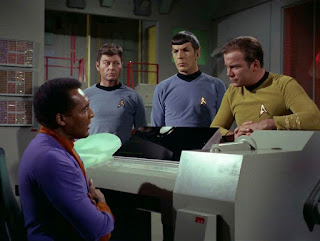 I watched this episode again today. I watched it specifically because it was today. Mainly, this story is about limiting the extent of computer automation, and how taking risks to achieve things is a vital part of humanity. But beyond that, this episode has something perhaps less obvious to say.

At no point, during the entire episode, is any mention or reference made to the fact that Doctor Daystrom is a black man. He is the most brilliant computer scientist of his time, an unparalleled genius. He is also deeply troubled by his own legacy. He is eventually driven past his breaking point by the events of the story. But all these things are the triumphs and failures, the accolades and problems, of a scientific genius, not of 'a black man'. This character could have been played by any actor. He was played, wonderfully and passionately, by William Marshal. But the colour of his skin made no difference, in any way. He was a scientist. He was a person.

I give great credit to my parents, and to the other family surrounding me in my childhood, that I saw nothing out of the ordinary about this fact. To me, all people looked different. All individuals were unique, and yet all people were the same. We are all people. Differences in culture, language, appearance; all these were fascinating things to be learned about and appreciated. Only later, as I learned about history, and saw in the news the strange and unreasonable ways in which some people regarded such things as skin colour, did I realise how powerful the subtext of this episode was.

Posted by migellito at 2:18 PM 4 comments