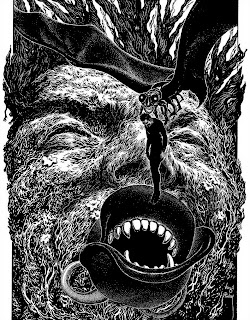 After much contemplation, I share my Event Table for the 1 hour walk between Castle Nicodemus and the visiting Caravan from The Fields We Know. Compared to most of my event tables, it has a high percentage of actual encounters. This is mostly due to the fact that I only end up rolling on it twice a session, due to the nature of the G+ Hangout game.
I think it's ok to go ahead and share this now, since there are more people with characters actually originating in the world where Nicodemus sits.

Using the two different dice types puts a big flat spot of equal probability in the middle of it, from 9 to 13. When you do that, the flat spot will be one more than the difference between the two dice.

Posted by migellito at 4:29 PM 0 comments

A report to the Van Toads

I have arrived in the Dark Country, and have made contact with Rupert. We are forced to remain outside the small, brutish village known as Nightwick, but Rupert has been good enough to allow me a room in his own modest abode. 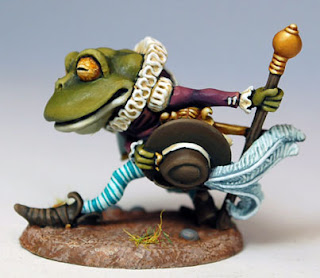 I believe clues to the nature of this White Lady can be found within the nearby ruined abbey, a former bolt-hole of the infamous Sword Brothers. Explorations there are proceeding, though it is slow going as I must rely on the assistance of whatever ruffians are currently about, and motivated by base greed to delve within the edifice.

A short aside: gnomish soldiery will not do. They talk a good game, but crumble under adversity.

The mausoleum entrance at the cliffs on the far side of the abbey may prove fruitful, but seems to be heavily defended by horrid Elk-men. I can only assume they are the result of the repulsive Elk cult, which is worshipped nigh-openly within the village. The large nave of the abbey is occupied with bloodthirsty goblins, and unsuccessful attempts at entry have discouraged the local toughs. This leaves the two standing towers. I have gone beneath the Northernmost of the two more than once now. Each time we have met with horrid monstrosities, but they have not been insurmountable. In addition, sufficient treasure was found to encourage Men to continue delving therein, I believe.

At the bottom of the North tower stairs, going west will lead past a small chapel and two alcoves along a corridor. These alcoves are dedicated to some saint of the Men, but now are debased by Chaos. Past these is a room still containing the vile moving skins of deadmen. They are definitely dangerous.

South of these tower stairs is a room with a small pool, which thankfully contained enough coinage to whet the greed of my companions. Beyond this there is apparently a lair of tiny rat men. East from this point, we heard a diabolical ceremony underway. I believe this is the direction in which my first answers about the Lady may lie.


I will report further at a time such that I am able to.
Yours in service, Frederick Bull, esq.

Posted by migellito at 6:22 PM 0 comments

Escher's Thaumaturgic Disjunction
Level 2
This spell will catastrophically disrupt another spell being cast, as long as the target spell is of 1st or 2nd level. The caster of the target spell must make a successful save vs. spells or suffer one of two possible consequences, as decided by the Dungeon Master. The caster either takes 2d6 damage, or must roll on the Dungeon Master’s choice of Magical Mishap Tables. Range: 4”

Fire Slugs
Level 1
This spell is similar in every way to Magic Missile, except that it specifically causes fire damage. Instead of bolts of magical energy, it shoots forth small, slimy, lava-like fire slugs. They dissipate into vapour as soon as they hit, completely preventing them from being able to set anything on fire. The only exception is if the target has been doused or covered in some flammable substance, such as lamp oil.

Copperfield's Phantasmal Remuneration
Level 2
This spell creates up to 10 gold pieces worth of local currency for every level of the caster. It can take any accepted form, but no more than 1 lb. per caster level can be created. The illusory currency lasts for 1 turn per caster level, then turns into a worthless base material chosen by the Dungeon Master. Gold coins become lead discs; small gems become pebbles; paper currency becomes strips of town-criers parchments; etc.

Posted by migellito at 4:20 AM 1 comments