Jack at The Blue Rabbit 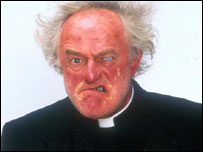 Being a record of some of the exploits of the good father, related during what literary drunkards often refer to as a moment of clarity.

Well, we headed out onto the moors today. There’s been talk about this beast roaming around out there. Some say it’s a devil cat. At any rate, there’s a reward, so it seemed like a good way to spend the morning.

On the way we passed by some peasants, and I gave them the good word, letting them know they would most likely end up burning in purgatory. They were very appreciative, and let us know about a sorcerer who had been seen round the countryside, causing anxiety through his Spanish countenance and scaring the sheep. Now, I believe this turned out to be an unlucky choice of words on their part, calling him a sorcerer, as you will see, but I don’t blame them, as they’re all just a lot of ignorant Cornish.

They had told us this Spaniard had been spied about hangman’s hill, so that’s where we made for. Sure enough, three crows started following us almost straight away, and not a one of us failed to see this as an ill omen. One got away, and we probably should have sworn it all off as a bad job and went back to the abbey there and then, but on we pressed. I walked up to the gallows and someone noticed one of the stretched fellows there had recently gone missing a hand. After a stroke of luck, I saw wizard tracks heading off into the moor.

Following the tracks, we arrived at a hut made of bones. The others decided to walk on in, and realizing their godless ignorant ways, I knew it would be pointless to cry out against it. Inside, we found that body’s cut hand covered in wax and burning from the fingertips, all written round with sorcerous designs and eldritch patterns. There was also a pot on the boil, but none of us tasted it.

I left a note, letting him know he should lay off bothering the sheep. We continued to track him, and before long we saw him walking the moor. Finn headed out to get round behind him, and the rest of us approached. He held out his hands to let us know he had no weapons, and I started talking to him in Latin. His Latin wasn’t the best, but after all he was only a Spaniard. Before we’d gotten past the niceties, the ghostly skinned skeleton woman approached a bit closer to the Spaniard so she could be ready for anything. Now, I don’t blame her for this. Mostly because of how she filled out her robes. It’s not all bones under there, let me tell you. Well, he got a bit nervous and was showing us his hands again. Then Finn hit him on the head from behind. I’m guessing that’s where it all started to go pear shaped. I put the light of our Lord in his eyes, and he held up his hands and buggered off. Just like that, quick as a wink. He’s there and then he’s not.

Without much else to do, and a bit worried he might be upset now that one of us had stuck him with an axe, we went off following more tracks. These led us to a pond. After a bit of prodding, the ghostie woman managed to pull out a few human skulls and other bones, which was a bit unlucky as my hired man, Girly, had just had a drink from it.

Oh yes. Sometime before that, we’d found a net made of fog laid out on the ground, with a big joint of meat in the middle. My guess was the Spaniard was trying to trap the devil cat. Scary, the ghostie lady, ate the whole bloody thing. I couldn’t believe it. Then, somebody wrapped the misty net on a stick and brought it along. 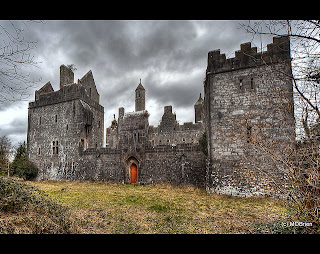 So, at any rate, here comes the Spaniard again whiles were at the pond pulling out bones. He’s got out some kind of crystal ball, and he looks none too happy. Flip goes the net, and Bob’s your uncle, the Spaniard’s bagged. Then ghostie hit him with her axe again. We carry him back to the abbey, and go to see the abbot. Completely ignoring all the trouble we’d taken, and the risk to our own bodily health as well, not to mention the bloody sheep, the abbot was bound and determined to fix his eye on how the Spaniard might have been trying to capture the devil cat, and how we’d then been a bit rough with him. Well there’s thanks for you.

Later on, we went back out to the Spaniard’s bone hut and knocked the hand out of the magic circles, purely by accident, let me assure you. There started rising a bilious smoke out of the earth, so we scarpered off back to the abbey. I’m pretty sure the diabolical laughter I heard coming from the direction of the hut was something unrelated.

Now here I am taking my ease at the Blue Rabbit. There are some unfortunate ladies here in desperate need of my charity, so I’ve agreed to give them a few coins for their hard works. I may also have a bit of drink.

Posted by migellito at 3:03 AM

I'm not very confident that you got my email - and I'm certainly not trying to be pushy, so if you did I'm sorry about harassing you twice - but is there any chance of Skeree the Bonewoman visiting Castle Nicodemus this Monday?

I know it's a long shot - I imagine it's a heavily subscribed game.

Richard, sorry, I was off my email all day yesterday watching Father Ted with Mrs. I'd be delighted to have Skeree visit Castle Nicodemus. I had already sent out the selections from the pool on Friday, but I will add you in for subsequent pickings! Also, in the case someone can't make it tonight, I will certainly let you know :)

I'll check for a cancellation at 4pm EST, but if you haven't heard anything by then I'd probably better just sleep through (your 9pm EST is my 3am in France, and the kids have to be up at 6:45...).

Thanks for thinking of me.